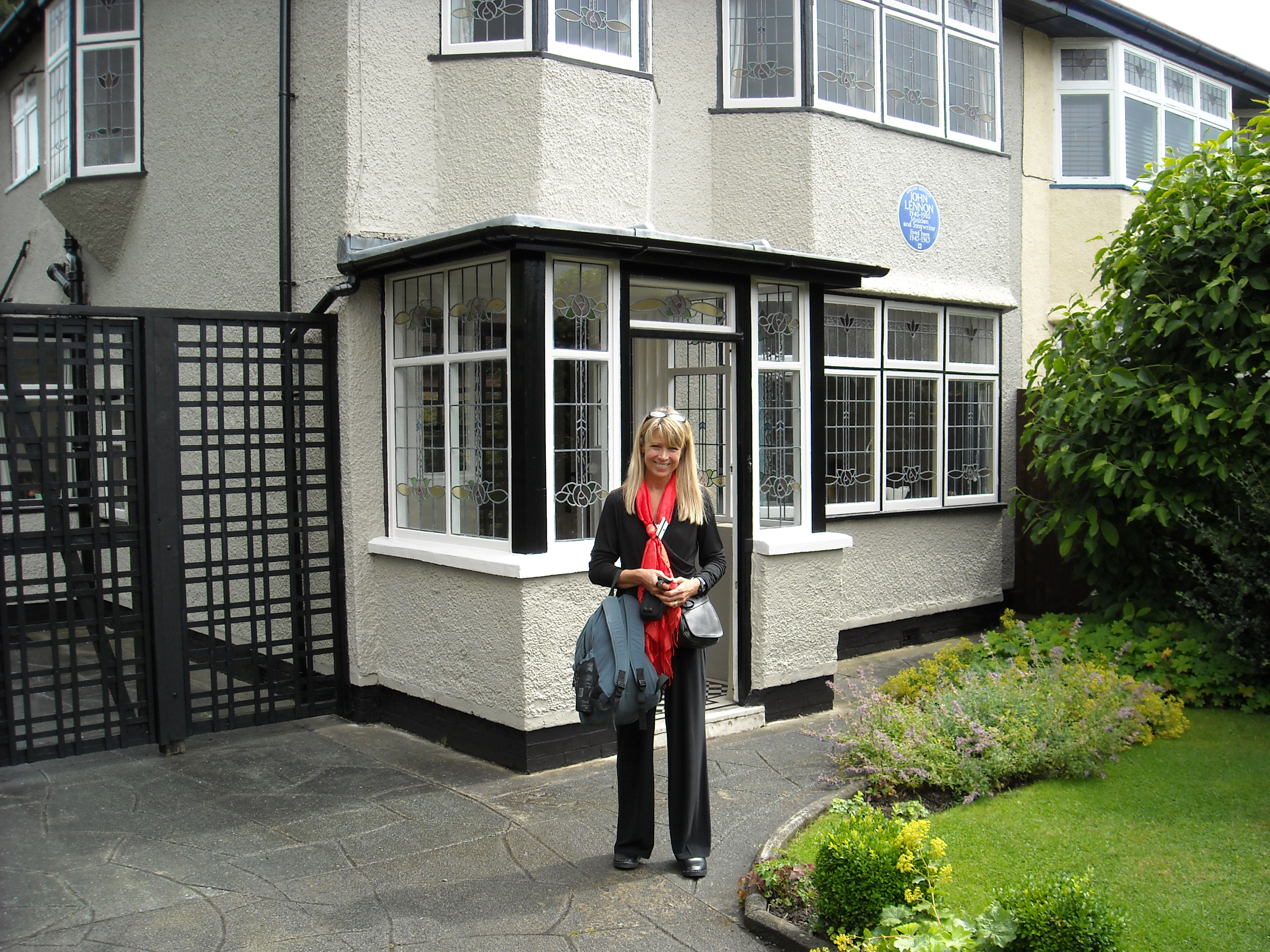 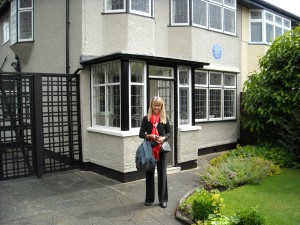 Today on December 8, I feel the presence of John Lennon who crossed over to the higher realms on this day in 1980. His music and words helped me find the courage to pursue my own path in the 60s & 70s. In 2009 I was blessed to visit his childhood home in Liverpool. This story is a tribute to him and his gift of turning his pain into music – music that changed my life.

I’m standing in John Lennon’s childhood bedroom at 251 Menlove Avenue in Liverpool, England, admiring its sloped ceiling, small twin bed, and lovely window looking out over the street. This is where John lived and created music for 18 years. Posters of his favorite 60s actress Brigitte Bardot line the wall above his bed, and John’s own art sketches and writings adorn his other walls.

From this tiny room was born music that changed the world – especially my world. Yet it’s such a small cocoon – this room that fits only me and one other adult – the custodian hired by Yoko Ono to protect the home she refurbished to look exactly as it looked when John lived here until 1963. Yoko donated this home to the National Trust so that it would be forever preserved as part of history.

Colin Hall, the well-educated, soft-spoken custodian tells me that John spent many hours a day sitting on this bed dreaming up a better life – sketching his visions and writing music while he gazed out of this window at the tree tops – all the way to Strawberry Fields – an orphanage a few miles away.

It makes me cry to imagine how John’s powerful dream for a better life reached across the Atlantic Ocean in 1964 to touch me – a lonely, young girl growing up in Alabama – and how his dream traveled around the globe awakening so many other people. I remember the moment I first heard a Beatles song and how deeply it rocked my world.

Standing in this room, I can imagine the birth of that powerful music and the pain that inspired John’s genius. Closing my eyes, I feel John’s creative brilliance burning up these walls, his restlessness, and his dark and powerful grief for the mother he loved who abandoned him – the pain that fueled his work.

“This room brings many people to tears,” says Colin standing beside me. And yes, you can feel the sadness that hung over this bedroom when John was brought to live here in his Aunt Mimi’s house at the age of five – abandoned by both parents.

By then, John’s father had long disappeared. And his mother, Julia, had gone to live with her new boyfriend. Young John was brought to this house to be raised properly by his mother’s sister, Mimi, and her husband George. John’s mother continued to visit him here and tried to maintain a relationship with John. But she soon started a new family with her boyfriend, and John was never brought to live with them.

In this house, John’s new life unfolded. He grew to love Mimi’s husband George who became a nurturing father figure to him. But when John turned 15, Uncle George died suddenly – leaving Aunt Mimi broke and desperate for income so that she and John could stay in the house. Mimi took in student boarders – as many as five at a time – to help pay the rent for this two-bedroom house. And John, once again, felt the devastating loss of someone he loved and needed.

It was in this abandoned, struggling world that John spent his hours sketching, writing poetry, playing guitar and writing music. He excelled in art class at his local high school, but flunked his other subjects -which caused endless arguments with Aunt Mimi.

Mimi was convinced that John’s fascination with rock and roll would ruin his life, and she only allowed him to play guitar on the front porch. This didn’t stop John from pursuing his music passion; in High School he started a rock band called Johnny and the Moondogs – which soon became The Quarry Men.

When John turned 17, his mother Julia, on a visit to see him, was hit by a car while crossing the street in front of Mimi’s house. She died instantly. John was, once again, devastated by loss and poured his pain into music.

That same year, John’s band was invited to play for a local church feast and after the gig was over, John was introduced to Paul McCartney, a young musician who was also grieving the death of his mother.

Just a few blocks across town, in an even poorer neighborhood and smaller house, 15-year old Paul McCartney had lost his mother, Mary, to breast cancer. She had been a loving presence in Paul’s life and was well-respected in the community as a nurse and midwife.

Her death had devastated Paul, his father, and brother Michael. The McCartneys comforted themselves with memories and music; Paul taught himself to play guitar and write music in the living room of his cramped home in this poorer section of Liverpool.

When John invited Paul to become part of his band, the Lennon-McCartney genius was born. Even though they were young high school boys, they quickly began writing music together – hanging out in the front porch of Aunt Mimi’s house, smoking cigarettes, exchanging lyrics, laughing and dreaming up a better life.

Their inspired music that the world came to love so passionately didn’t come from privilege, opportunity, brilliant teachers and all the advantages of life today. Instead, their music came from dreams that were launched in loneliness and shared grief.

From grief, came their longing to uplift and inspire others who needed love, who felt lonely, or abandoned. This passionate music that spoke of love reached across the universe – to millions of people longing for connection.

When Beatle music first began filtering into my local Alabama radio station and filling the airwaves of my world with a new sound, a new dream – I was only 12 years old. Yet it spoke to me in ways that John and Paul, light years away, could never have imagined.

From their brilliant new sound, I understood that life was expansive and carried endless possibility. When I heard their voices in harmony, I realized we were truly all connected, and that anyone from anywhere could have an extraordinary life – even me.

How that inspiration was delivered around the world in simple words such as “She Loves You” – was the miracle of the Beatles. Somehow their pain, dreams, and energy carried hope to anyone who felt alone, confused, or lost.

The Beatles created an intuitive connection between people everywhere that started a shift of consciousness in the early 60s. Their simple heart-felt music changed millions of lives for the better. I was one of those people and the Beatles were truly the miracle of my early life. I’m forever grateful for that.

Now, as I turn to leave John’s small room and follow the custodian down the stairs of Aunt Mimi’s house, I offer a simple prayer of gratitude to John for turning his pain into music. I tell him that I can’t imagine a world without his lyrics. And I can’t imagine the course my life would have taken without the Beatles. I blow a kiss into the empty room and say “Thank You John.”

How ironic that my husband Paul died only months before John died in 1980 – two of the most influential people in my life exiting within months of each other. And now, today, I get to come full circle and thank the first man whose extraordinary gift changed my life…

If you feel lost, alone, depressed, or hopeless, consider this: That dark, powerful pain is your gift. Dig deep and feel it, then use it as your fuel. Make the world a better place by offering to others what you wish had been offered to you.

Take a moment right now to imagine two teen-aged boys from Liverpool living in poverty, with no opportunities for a better future, and grieving the losses of their mothers.

Picture these boys hanging out on Aunt Mimi’s small front porch, playing guitar, laughing, and writing music about love – in spite of the grief and pain in their young lives.

Imagine their pure fearless intention, their innocent joy turning itself into magic, into love, and spreading across the universe – changing everything in its path. That was the gift of the Beatles.

Now, YOU try it…. See if you can imagine taking one small step in a brave new direction – in spite of your pain and losses. That step will be your greatest gift to the world.